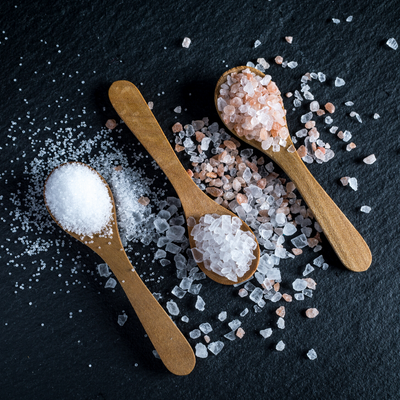 Types Of Salt: Which Is Best?

We all know that it is important to eat less salt. Eating too much sodium can increase your risk for serious medical conditions such as high blood pressure, stroke, and heart disease. When at the grocery store, you may notice many types of salt options to choose from including table salt, sea salt, kosher salt, lite salt, and Himalayan pink salt. It is important to remember that all forms of salt contain sodium and may impact your health. Additionally, you should be aware that up to 2/3’s of our daily sodium intake comes from what is already in our food.

The 2015-2020 Dietary Guidelines for Americans recommend that Americans consume less than 2,300 mg of sodium per day, which is around 1 teaspoon. However, the average intake for Americans is around 3,400 mg or more per day! Some hidden sources of sodium include cottage cheese, processed meats, boxed mixes such as Rice-A-Roni and macaroni and cheese, soups, and breads. Processed foods and restaurant foods contribute a large amount of sodium to our diet. It is estimated that more than 70% of the sodium we consume is from processed foods and restaurant meals.

So what about the salt you add to your food? What are the differences between these types of salt? And is one type better than the other?

Table salt: Also called iodized salt, as it is fortified with iodine for thyroid health. Table salt works well in cooking and baking. It is usually highly refined which removes most of the impurities and trace minerals. Calcium silicate, an anticaking agent, is often added to table salt to prevent table salt from getting lumpy and to pour easily from the container.

Sea salt: Is made through the evaporation of salt water. Depending on the source of water, it may contain some trace minerals. The minerals depend on the water source and lead to the different flavors and colors of seat salt. Sea salt is less ground than table salt making it courser with a more potent flavor. Because it has a stronger flavor, some individuals may end up using less sea salt than table salt when adding to foods. Even though sea salt is often touted as being healthier than table salt, the sodium content is comparable and the small amount of mineral differences offers no known health advantages.

Lite salt: Contains about 50% of the sodium of regular table salt. A blend of sodium chloride (table salt) and potassium chloride. Lite salt is helpful in cutting sodium intake but has more of a metallic or bitter taste. Check with your physician about using these or salt replacers if you are on certain medications or have kidney problems. Remember, lite salt is NOT salt free!

Himalayan pink salt: Himalayan salt is harvested in Pakistan and often contains trace amounts of iron oxide (rust), which gives it a pink color. Potassium, magnesium, iron, and calcium are found in small amounts. Himalayan salt also contains slightly lower amounts of sodium. This type of salt is known as a finishing salt, bringing out flavors of foods and adding a crunchy texture.

The table below compares the nutrient content of the different types of salts. Remember these all are very small amounts and overall the difference is negligible in comparison to the amount of sodium we consume from our foods.